Near the end of finishing up my perimeter work, I came across my first complication in my work with the glen.  I was traveling off-path and basically beating the bushes as I did my best to follow the line from large tree to another.  I had no idea where the line would lead next though it appeared to be aiming at another large tulip poplar dead ahead.   Sure enough, the line held steady, touching the back edge of the tree, placing most of it within the perimeter.  As usual, I began to see if the line connected onward or did it turn at the tree?   It continued onward.

As I stepped forward the next few feet the rods took a very unusual turn to the right.  It was more of a twitch or a jerk, actually.   It was not something that I had seen with this type of work and I retraced my steps to be sure.  Yes, it was still there and the rods took me on an odd curving angle towards another tree and then turned a hard right 90 degrees.  They then held steady.  I retraced things to confirm and yes, it was correct.

Taking another step, I saw that I was coming up on one of the walking paths that cuts through the woods.    As I took another step I saw a flash of bright red under some brush.

Drawn by the color I eased the rods down and looked closer.  There, tucked under some leaves and brush was a bone.  As I’ve posted before, it’s not unusual to find animal bones in the woods.  This one was different, very different.  Wrapped around what appeared to be a thick deer femur was a bright red yarn which was the color that had attracted my attention.  For some reason, someone had tied about 2 feet of red yarn around the bone and another 3 inches or so were frayed and broken.

Needless to say, it caused me to step back a bit and survey the area.  Leaving the bone to rest where it was I began to look around the area for more of the same.  Typically, if you find one, you will find more.  In this case though it appeared to be by itself.

I attempted to try a few questions but found that my peaceful, settled state was gone.  The find was definitely unusual but there was no reason to freak out.  I did do a quick dowsing of “Is this dangerous spellwork to me?” and was given a firm No.  I stepped back further from the area to settle myself a bit and to make sense of what I had walked into.

I kept it to basic deduction.  It was, most likely, a deer bone as it was very thick.  The ends had been chewed away and there were some more recent marks from mice and squirrels.  It had been in the woods for a while, I would guess since last Fall.  Could it had been used during a Samhain ritual?  Someone had tied the yarn around the bone on purpose, possibly to hang it up somewhere.  Though the choice of color seemed particular (red is used throughout all manner of spiritual sects), it might not have any meaning at all.

There was also no way of knowing if it started in the woods or simply ended up there.  Someone might have had a ritual in their apartment (there are several within close distance to the woods) or hung it from a patio.  It might not have been a ritual at all and could have just been someone making wind chimes of bone.  Regardless, the wind blows it down, an animal finds it and drags it into the woods.  It could have also come from anywhere in the woodland and ended with a similar fate as a fox or something similar drags it to it’s new location.

Though not scared or “spooked” I was a little unsettled by the find.  I opted to leave it lie and to do some research on it.  Over the past week or so I’ve been able to come up with a reasonable idea of what the item could be.  After research I also went to my divination and my meditation to see if I could glean any information from there as well.  The results were interesting to say the least.

I believe what I found to be part of a Witches’ Ladder (or something like it.)  I have some links below that cover the idea.   The basic idea – a form of spell work or fetish where a cord of a particular color is knotted a certain number of times and items such as feathers and bone are placed into the knots.  It may be used for protection or curse work.  Pretty standard stuff, actually.  The key clue came when I found some pics of a Ladder done with a bone not only at the base to weigh the ladder down but also as a brace at the top with the Ladder hanging down from it.  Either form would explain the way the yarn was frayed on what I had found, like it wore away and eventually broke over time.

With that being understood the next step was to know if it was for positive or negative purposes.  The divination and dowsing work I did suggest it was not for a negative purpose.  It also does not feel negative.  I’ve encountered negative and know it.  Believe me, this is not it.

It would be very shallow of me to think that I was the only one to have been called by the energy in these woods, to think that it was just “my glen.”  That is foolishness.  In retrospect, it makes complete sense that someone with a Wiccan background would have also felt the energies here.  Once you are within the perimeter they are anything but subtle!  It’s also possible that the energies of the woods called to other sensitives nearby just as I was called.    On the other hand, perhaps they simply “liked the woods” and were not consciously aware of the energy here?

Below is a list of some of the links I visited while researching. They are in no particular order.  I figured I would post them here and share resources. 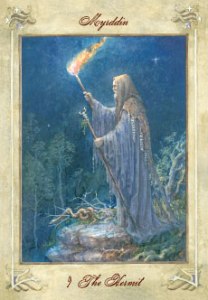 I mentioned that I did some divination as well and I decided to use my Lleweylln Tarot.  I pulled a single tarot card at first and received, interestingly enough, The Hermit.  I take this to mean a solitary practitioner or, at least, someone that was working alone and for their own purposes.  Someone who was withdrawing from the world.  The Hermit card would also suggest someone with more than a little wisdom and possibly skill.  It’s also possible that the person did their work, whether it was here in the wood or elsewhere, at night.  It could also mean a homeless person who also works with the Craft.  (I mention this because when I am off trail I’ve seen evidence of homeless activity in the woods.)

The second card I pulled, coupled with the Hermit, signaled that strong energies where in play for the individual.  Death.  This card told me that for whomever was responsible for the bone had or was undergoing positive transformation, a change from one life to the next.  They, perhaps, were not aware of the positive nature and instead where simply going through a transformation that might have “felt” painful. The energy of this card could very well have been what the fetish had been built for.  I also could not ignore the fact that I had also received the Death card when I had done my reading previously in regards to my own work with the glen.  Transformation and change.  It would appear they were something these woods are quite adept at assisting.

Finally, here is a photo of the find as it lay when I first found it. 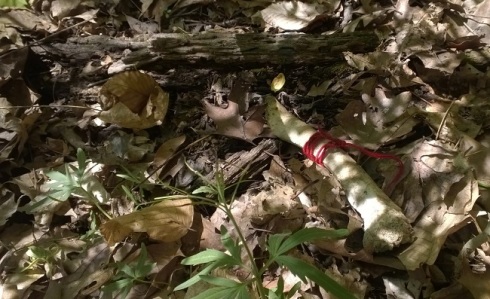 I’ve been back there twice now and it is still there.  It has been moved but only slightly and most likely by a rodent chewing on it.  My plan is to look around the area a bit more to see if I can find the other pieces to it.  Otherwise, I will leave it there and, if anything, simply cover it with leaves so it remains undisturbed.

I’m interested to hear reader’s thoughts on the find.  What would you do if you encountered something like this in the woods?

Like Loading...
This entry was posted on Thursday, May 7th, 2015 at 10:42 am and tagged with Earth Energy, Energy, Oracles, Pagan, Sacred, tarot, Wicca and posted in Dowsing, Energy Work, Local Energy, Mysteries, Narrative, Nature, Oracles, Tarot, The Glen. You can follow any responses to this entry through the RSS 2.0 feed.
« Spring Boil
A Lesson in Not Knowing »

2 responses to “A Troubling Find”